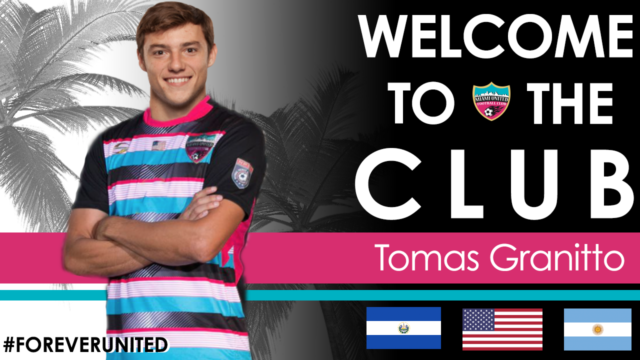 Welcome to the Club Tomas Granitto

Miami United FC acquires Salvadoran 24 year old Tomas Granitto.
Team‘s CEO & Founder Roberto Sacca made it official this past Thursday evening saying: “We are very happy to have Tomas in our club. He is a fabulous player. He‘s definitely one of the best home-grown talents in South Florida. We think he can quickly become a key player inside Coach Reinoso‘s squad. Despite his young age he will give us experience, and a lot quality in the midfield. This year will be the most beautiful and exciting NPSL Season yet.“

As Roberto Sacca mentioned, Tomas definitely possesses experience beyond his year. Excelling at the Collegiate level and becoming a professional at a young age, playing in El Salvador‘s Liga Mayor de Futbol, NASL & USL has given him plenty of matches under his belt. He also played for El Salvador‘s U-20 National Team maintaining himself as a viable young option for El Salvador National Team.

Raised in South Florida, Granitto makes his return to the place which he called home growing up with great expectations by saying: “I am proud to be part of Miami United. I‘m happy to represent this club as a local player.”