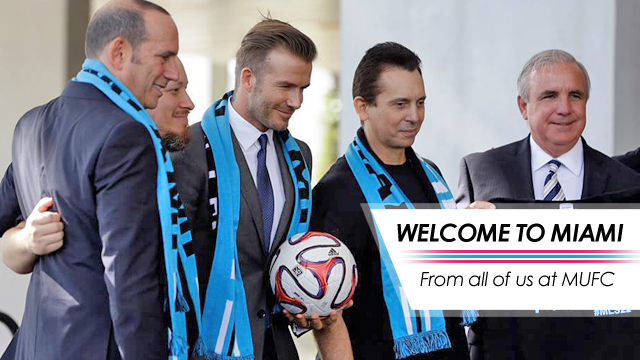 The management, coaching staff and players of Miami United FC are delighted with today’s announcement that David Beckham and the MLS have chosen Miami as the location for the next expansion team to the MLS.

We believe that this is further evidence of the demand in the region to further embrace ‘the beautiful game’. In David Beckham the MLS and the region have found a partner with undoubted passion and love for the game as evidenced by his status as a world renowned icon of the game of soccer. With the growing demand for the sport in the area this represents an important step in establishing soccer as the fastest growing sport in South Florida.

We are delighted to see others share our passion of bringing soccer to the beautiful and unique city that is Miami. Since day one it has been our goal to create a “United” soccer following in Miami by engaging and bringing all the many different peoples, languages and cultures together for the love of the game. Just within the span of two years Miami United has been established as the fastest growing and most supported team in the NPSL.

MUFC has establish local ties to various community businesses, charities, as well as Miami Dade College. While we are all about engaging our the Miami community and fostering great local talent, Miami United’s aspirations are also global, as we have officially partnered up with the iconic watchmaker Gaga Milano as this year’s jersey sponsor. In addition, all the club’s jerseys will be imported from Italian jersey maker Garman.

From all of us at Miami United FC, we welcome David Beckham, the MLS, the newly formed team and look forward to growing Miami United until we too are in a position to mount a challenge as the regions most recognized soccer team. We know with fans like ours and leaders like David Beckham, Miami will with out a doubt be a world renowned soccer city.