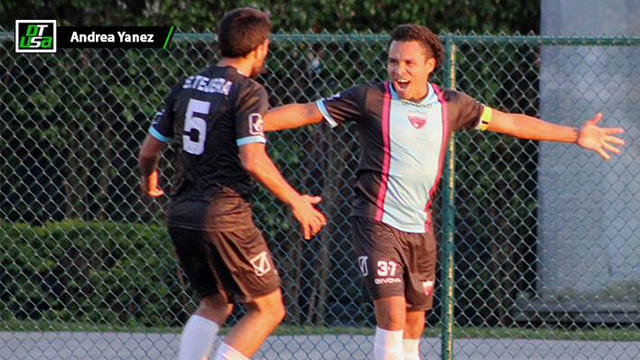 Miami United chalked up the club’s first “W” of the season with a 2-1 win over Tampa Bay Rowdies 2. Thanks to the newly emerging partnership of “Rambo” de Leon and Ignacio “Nacho” Calcagno, United was able to outscore the competition and in the end take home all three points.

Miami struck first, scoring in the 32′ min thanks to some beautiful one-two passing in the middle of the field and a first touch finish by Rambo Del Leon, who blasted the ball into the bottom corner.

Tampa managed to level the match in the 50′ min off a quick restart. However, that didn’t last, Miami came roaring back thanks to Nacho, who produced the game’s final goal of the evening in the 52′. And what a goal it was! A high arcing over the top ball delivered all the way from Miami’s defensive half, allowed Nacho to sneak past the defense and volley a bouncing ball past the keeper.

Tampa turned up the heat late in the second half. However, United’s defense stood tall and keep the scoreline set, giving the club it’s first home win of the season.

Miami’s next league match will once again be held at home, this time against Fort Lauderdale. That being said, the club does however jet out to Las Vegas to take on Las Vegas City and Ronaldinho (Yes, that Ronaldinho. The only Ronaldinho.) The match will pit two of Brazil’s greats, Adrinao and Ronaldinho against one another in an inter-league friendly at Sam Boyd Stadium May 14th.