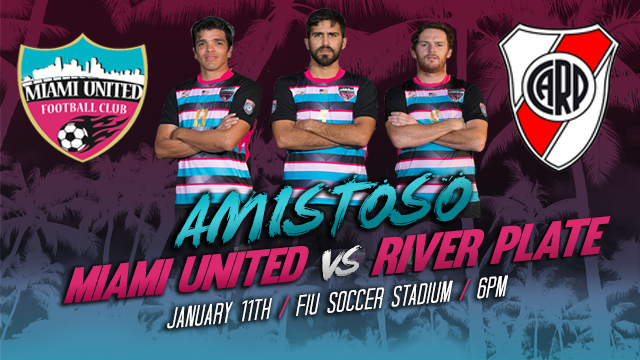 Miami United FC is pleased to announced today it will open its inaugural 2018 preseason match against River Plate at FIU stadium January 11th at 6p.m. “This is another exciting moment for our club, as our preseason just start in Miami signifying our first official match, vs one of the most important club in the world ” said MUFC CEO Roberto Sacca “We’re happy to begin our preseason in this way and are happy that our fans will have the opportunity to see us play at At FIU with one of the top club worldwide ”

To start the new season like this is something wonderful that does not happen every day. Miami United would like to thank Enzo Francescoli and all the staff of the River Plate for giving us this opportunity.

“This is a very exciting time,” Miami United Head Coach : Gerardo Reinoso said. “Preseason matches are always a very important time for the coaches and players to establish a rhythm, and especially important for all our new players to better understand each other.” The match against River Plate will be the first official pre season match for our club. Later on in January the club will compete in other games vs international clubs and MLS teams . Additional preseason details will be announced at a later date.