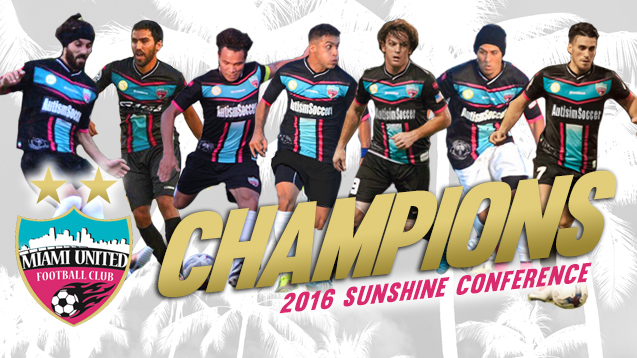 After the teams 3 – 2 victory over Kraze United, Miami United were crowned champions of the Sunshine Conference for the second time in club history! Two conference titles in four years isn’t bad at all. This will be Ezequiel Tejera’s second time winning the title as he has been with the club form the very beginning. His loyalty and quality of play has help Miami United through out the years. Newer players and returning players from last season all clicked together making the club what it is today, CHAMPIONS!

Coach Ricardo Páez did a fantastic job keeping players working together, prepared and focused. Many young players attended the numerous tryout session Miami United held leading up to the 2016 season, but only the best were chosen. Coach Paez’s exceptional eye for talent and ability to mold our young players was critical for establishing the 2016 squad. Our support staff also kept out players healthy and in peak physical fitness before, during and after games.

Next stop, Regionals. Miami will now move on the in 2016 NPSL playoffs taking on clubs from the rest of the greater Southern conferences for a shot at the National title.